Postal Banking Debate to Heat up in Parliament 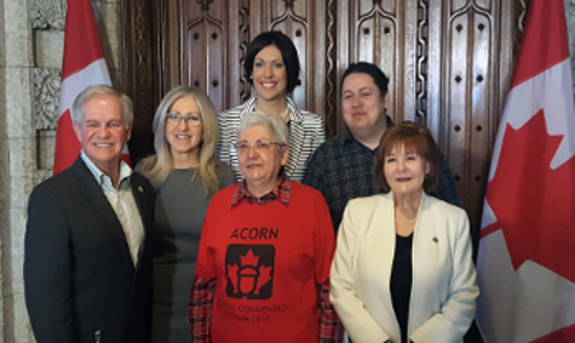 Ottawa – Postal union and social justice leaders, along with a mayor on a mission, joined Member of Parliament Irene Mathyssen (NDP, London-Fanshawe) on Parliament Hill this morning for a press conference to put pressure on Members of Parliament to support postal banking in Canada.

Mathyssen, the NDP critic for Canada Post, recently presented a motion, M-166, calling for a committee to study and to recommend a plan for a federal postal banking system administered under the Canada Post Corporation. Debate on the motion begins tomorrow in the House of Commons.

“We have been advocating for many years to bring back banking at the post office as a way to increase revenue at Canada Post while expanding its capacity to offer services that are both wanted and badly needed,” says Mike Palecek, CUPW President. “Thousands of rural municipalities and indigenous communities are without banking services but many have post offices that could offer banking services.”

Postal banking is the provision of financial and banking services offered through the post office. It is not a radical idea. Postal banks already exist in many countries including the UK, France, New Zealand, Japan, India and more, and are used to create financial inclusion, promote economic development and generate revenue to preserve public postal services and jobs.

Canadians have an appetite for postal banking. Over 600 municipalities have passed resolutions that support postal banking and 63 percent of respondents to a 2013 Stratcom poll supported expanding revenue-generating services, including financial services such as bill payments, insurance and banking at Canada Post.

In January, the Federal Government finally made public its long-awaited vision for a renewed Canada Post, calling for expanded service options and alternative revenue streams.

“Postal banking fulfills the Government’s vision for Canada Post. It is profitable, sustainable, and provides accessible banking services to all Canadians. It is a win-win opportunity for the Government to better serve Canadians,” says Palecek.

Postal banking is an issue worth fighting for and it is included in CUPW’s bargaining demands in the current round of collective bargaining with Canada Post.