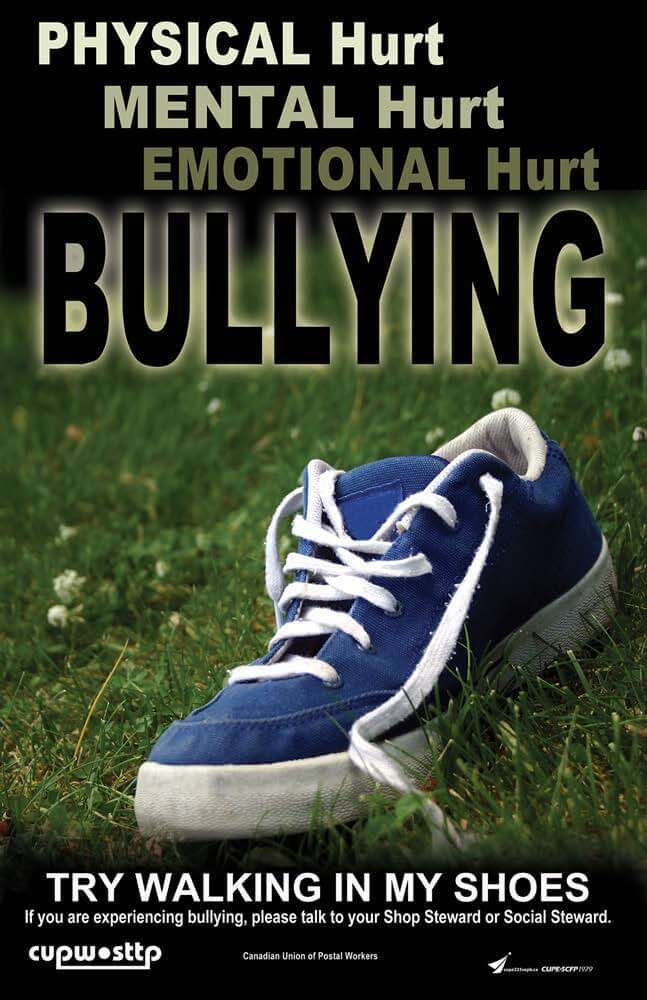 The Canadian Union of Postal Workers will meet interim President and CEO of Canada Post, Jessica McDonald, and the heads of all unions at Canada Post, on July 23rd to discuss the ongoing problem of bullying, harassment and intimidation of workers.
The bully-bosses campaign began in January this year when a postal worker from Winnipeg asked the Prime Minister about bullying at Canada Post during a town hall meeting. Following the town hall, we were inundated with stories and complaints about abuse and mistreatment of workers on the work floor. The Prime Minister vowed to take action on this issue and said he had zero tolerance for this type of behaviour.
We have, and will continue to, push the Government to uphold its promise to not only investigate the issues, but instill a much-needed change to the culture of harassment at Canada Post.
We have met with Minister Carla Qualtrough on a few occasions, including April 30th, when we brought a mountain of binders filled with complaints from workers. During each meeting, the Minister has reaffirmed her commitment to making changes at Canada Post that will lead to a culture-change at the corporation.
The Corporation has proposed bringing in a third party to resolve this issue.
The meeting on July 23rd is to discuss the parameters of the project, what outcomes we might expect and consider the options for selecting the third party.
Many of the issues on our work floors are large and complex and they will not be fixed without changing the management culture at Canada Post. However, some issues, including 15.08 overtime harassment are clear-cut and should be resolved immediately. Letter carriers should not face discipline and harassment for working overtime because a broken route measurement system continually dumps more work on them. This problem could be fixed today if there was a will to do so. The absence of such action gives us reason to be cautious about the “solutions” proposed.
While dialogue and conversations are a great start, we need to see that the Government and the Corporation are serious about ending the culture of bullying, intimidation and harassment of workers. This issue will not go away without real action.