This year marks the 30th anniversary of the United Nations International Day of Older Persons. Since its inception in 1990, the world’s population has aged dramatically. Today, virtually every country in the world is experiencing growth in the number of older persons in their population.

The 2019 United Nations report of World Population Ageing estimates there were 703 million persons aged 65 years or over in the world in 2019. The number of older persons is projected to double to 1.5 billion in 2050. That means 1 in 6 people in the world will be over the age of 65.

The story is much the same in Canada. According to 2019 Canadian population data, 17 per cent of our population – or 6.5 million Canadians – are older than 65. This number is growing rapidly. In comparison, children (14 years and younger) represent 16 per cent of the population, and this number has been steadily declining.

What Role Can CUPW Play to Help Seniors?

As life expectancy keeps increasing, life for seniors today is very different than our ancestors. Many seniors continue to live active, fulfilled lives, but sometimes they need a bit of extra help, and if they don’t have children or other family members to help out, they may be forced out of their homes before they’re ready.

For many years, the Canadian Union of Postal Workers has advocated and supported ways in which Canada Post can leverage its expansive personal network of letter carriers and RSMCs to provide services to seniors and help them stay in their homes as long as they’d like. Some already practice some sort of check-in with their older clients, informally, knocking on someone’s door if they notice the mail hasn’t been picked up in a few days.

Formal check-in programs exist in many postal organizations around the word. In these programs, postal workers would check-in on registered seniors during their routes. In some cases, the check-in is done to ensure the immediate health and well-being of the senior and, if anything seems abnormal – such as no one answering the door – either social services or a registered family member is contacted. In other cases, the service is integrated into the health system, and the postal worker simply asks the senior questions to collect information that will be processed by the health authorities.

Countries like France, Japan, the UK, Ireland, and Singapore have implemented these formal programs. It works there and it could work here as well.

The COVID-19 virus has devastated the senior population in Canada and exposed the deficiencies in our country’s long-term care facilities.

The 2016 Census states that 425,755 Canadians live in long-term care or retirement homes as well as assisted living facilities. A study by the International Long-Term Care Policy Network using public data estimates that as of June 2020, 17,246 of these residents – representing 4.1% of all residents in long-term care and retirement homes – have been infected with COVID-19, and 6,236 of them have died as a result.

As the second wave begins to hit much of Canada, and we prepare for a long winter, CUPW believes the post office can and should be leveraged to do more for seniors to keep them safe from COVID-19.

Our ideas aren’t far-fetched. Many post offices around the world have leveraged the public post to help seniors during the pandemic. In Ireland, for example, seniors or their family members can request a local postman or postwoman to check in on them and ensure that the necessary services are activated in case they are in need. The service is free and people can easily register online. In addition, the postal worker collects, free of charge, any mail that these seniors would like to send.

France doubled down on its senior check-in program as the pandemic progressed, offering one free check-in a week. Nine thousand people have signed up according to the latest public data.

Postal workers are proud of the work we do. Throughout the pandemic, we have worked round the clock to keep citizens safe and at home, and we could do more if the Corporation invested in important social services.

While other post offices around the world have stepped up for their seniors, Canada Post has made no attempt to leverage its vast network to help seniors during a global pandemic. It’s time for Canada Post to step up, diversify its services and help seniors stay home and stay safe. 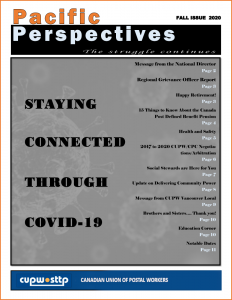